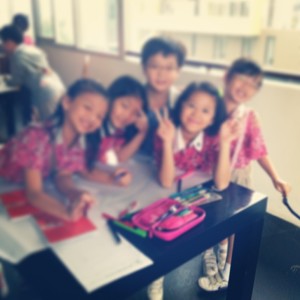 I woke up this morning and in a state of semi-consciousness, I got reminded of a kid… one of the students I taught in the first class I took in JKT. Those really smart kids.

Shes the one that led a cake-in-a-cup activity during Home Economics CCA, shes also the one that got it bad from me bcos of a April Fool’s prank. She apologize immediately after the class-lecture about the trick.

April Fool’s day, perhaps kids will put stuff on the chair, behind the door whatever whatever.
If its something minor thats fine.
But this team..

It was as though a normal school day, cos its after their lunch break, and usually they will be running in and out of the classroom as I arrived early. Thats fine, I dont really care, rule says you can enter a classroom as long as there is a teacher and it is within their break time.

So I place my bottle, pencil case and stack of whatever on the table. Went out of the room and gathered the children to come in for the lesson since its about time.

When I got in, my water went was presented on the table. Presented by a student. I had a lime in my bottle. I placed it there for vitamin input. I didnt bother much.

The kids were all excited sharing about the pranks in the other class. I just listened.
Just when I’m about to start my lesson, I picked up my bottle, open up the cap and was about to drink from it.

I brought it down and look through the bottle. HOLY CRAP it was milky!
WAH! I was super upset.
I smelt the content and I raised my voice.

“Who played prank on my bottle!”

Some kids thought it was funny, there were whispers, some laughed. Then someone mentioned there is tomato sauce in the bottle.

and I carried-on to address that water bottle, water is very important to the teacher as water is essential due to the high frequency use of the voice.

They then realize I was very upset, and someone called out that child’s name. Immediately I heard “SORRY MISS”

I instruct “go and clean it up.” she took the bottle, left the room and came back with a bottle of clean water.

I tell you.. kids these days…

So… Its interesting, the connection I had with this class of children.
The smarty pants, that would reason objectively and everything is fine after that. No grudge, no nothing. Thats a smart child. Instead of throwing tantrum or watever.
The irritating one that would go all out and sound “BeeDoU BeeDoU BeeDoU” just to irritate me and act naive when Im addressing her in the hopes that I would stop (which of course I did but also mention that its not helping her).
The really well-behaved one thats pretty, and also have a pretty name, hardworking and.. just obedient. I would love to have a daughter like her.
The others who can recite Chinese passages and script like nobody’s business and seem to be on a permanent happy mood come rain or shine.
One that was really quiet at the beginning of the semester, but bloomed and participate a lot more as the year progress.
One that still refuse to talk. Still hiding that smile.

Although on one part I was trying real hard to recall their names, the other part. Its just the flash back of the many wonderful moments we had together in class.
Their jokes, My sarcasm, Their improvement, My pride.

Now, I no longer get to have an intellectual exchange with them on a daily basis. But that connection, when you see each other along the hallway…

I hope you have had or will have such connections in your life too..