OKay, now I’m going to introduce to you 2 awesome blogs.

They are really awesome.

More awesome than mine.

They are basically my colleagues blogging about their adventure as really an expat.
not the fake expat like me. 😀 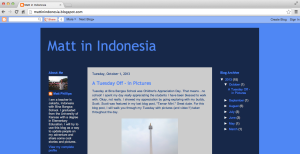 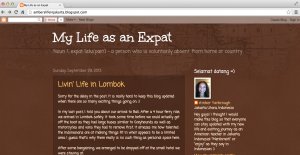 If you are looking for locations and sites in Jakarta to visit, thats their blog. 😀 Mine’s my boring old lifestyle blog. 😀

the blog site that is.

How to not love her? – Boon Xin.  That amazing smile, child like innocence in the eyes… awww…

My hero to be, the eldest boy – Boon Wee… *blissful sigh..*
The one that gets it the toughest yet what I saw is maturity underneath.

not forgetting their boy No.2. – Boon Kang! Let’s see him grow up and be a history maker!

and of course the mummy and daddy behind this parenting blog!

All photo credits goes to sengkangbabies.com

Thanks for coming by
Be Bless
Love,
Amanda

Finished reading the book “More Than A Chat”, felt its a really good book.
I realize that there are many perspective to Counseling. People’s conception of it.

In-fact if you noticed, some of my previous TOTD is from the same book as well.
Happen to pick out one story that I do think is pretty applicable in my life, and I wanna share it here.
Do drop by at the National Library or enquire with the REACH Family Services Centre on how to obtain the book.

Story 7 – A New Lens
“You become what you think about.” – Earl Nightingale

Stepping off the escalator that carried throngs of commuters out of the MRT station, Jit Meng found himself wedged in the midst of weekend shoppers sauntering up and down the makeshift covered walkway. A couple, deep in conversation, was exchanging intimate gestures as they walked past. A group of young girls was chirping away gleefully, breaking out in occasional raucous laughter. Lost in the crowd, Jit Meng was pierced with the familiar jab of loneliness, an old acquaintance that had plagued him for most of his life. However, not too long ago, he had learnt a new way of relating to this acquaintance. He remained himself of the intimate friendship and kinship he was privileged to have.

“It is completely fine to be alone,” he reassured himself.

At home in the crowd, he strode on with lightness, making his way leisurely towards a shopping mall. His gaze then fell on a girl sitting on her father’s shoulders. He involuntarily greeted her with a smile and the girl returned his smile with a beam of delight. A flush of warm feeling filled his heart. Yes, he could relish in the good things the world offered and express gratitude for the good things in his life once again. But his countenance and outlook were not like this one year ago when his mind had been filled with only negative thoughts.

Jit Meng had just returned to Singapore after spending three years furthering his studies in Canada. He was 28. He found a job as a customer service executive in an information technology company. Though gainfully employed and surrounded by supportive parents, he felt the world he lived in was hostile, where evil seemed to triumph over good. Injustice reigned in him as he pondered over why life did not deal him the fair share of good things he rightly deserved. Questions about why others seemed to have it all but not him loomed over his head. He was cynical about the seemingly good, and pessimistic about what life had to offer. The negativity was so deep-seated that he was not even aware that it was eating him away.

END_OF_DOCUMENT_TOKEN_TO_BE_REPLACED

Presenting to you flowers from Hong Kong~

Its gonna be photo flood, so please click on over to the Page~

Central’s “a Whimsical Christmas By The River”

I try very much to eat BlueBerry these days, do you know why? 🙂

What do people mean when they say put as much colors as possible on your plate? 🙂

In case you are wondering what have I been busy with? 😉

Special thanks goes to OpenRice.sg and eevon.sg <- my fav editor!!!

Would love to introduce to you Chef Clement, the man behind Eden Sanctuary Floral Cafe.
He’ll be the one that will be sharing with us a series of cuisine

Thanks for coming by~
Be Bless
Love,
Amanda

😀 Quite a comic relief

And so begins our hunt for the famous Tomato Beef Stall