Considering I had enough interaction during the working hours, with the kids mainly, I appreciate the quietness that comes when.. I don’t input and output much.

Then came the tons of Ice Shaken Lemon Tea I’ve been drinking. and of course, the amount of money I’ve thrown into the Starbucks card.

Especially and mainly because, you guess it, the interaction I get from the exchange with the Baristas. 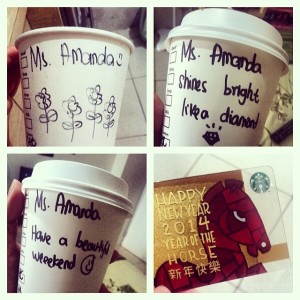 I only understood it recently that I would somehow bring myself to the SB nearby (like 3mins walk away) day in and day out to get that tea, not bcos I’m addicted to the tea, but because I look forward to that interaction with the Baristas.

Some days, its “Oh I want that Lemon taste to perk me up.”
Some days, its “I’m picking up groceries or breakfast, so hey, swing by.”
It just happens.

I took time to analyse the conversations and interaction, I came to this conclusion,
its that non-work, genuine smile, occasional sweet message on the cup (read successful marketing tactic enhanced by personal touch, as you can see from the photo above) that I went back for day in and day out.

Its especially because its non-committal, its non-consequential. Its a Hi, Weather talk/Acquaintance talk, Bye, thing.
Just nice for someone like me.

While I run away from extensive interactions, I run to this safe zone of communication. The duration, is the selection of the order, the processing of the payment, and that extra small talk when picking up that drink.

It intrigues me how understanding self becomes a coping mechanism. (I probably will be more messed up in the relationship department if not because of them). Its not necessary because the person is in a dire state thats why this was necessary, its simply bcos I’m a social creature. I am normal. (If the situation rings a bell, you are normal too, just not one of the larger crowd of norms).

OH and one thing I noticed about myself, or the my behaviour as a consequence of the situation(-as-a-whole), eye contact became an elusive act.
Because all these interactions are short and brief, including the dealings with the students, I don’t stay to maintain eye contact long enough. I had a verbal exchange with you, we understood each other, and we move on. Thats that.

Its like, “hey, what happened, why do I disregard eye contact these days. Yes, theres always that next thing to look towards, to glance over, but where did that sincerity in speech went to?”
Not that I wasn’t sincere, but I realise, it takes effort to maintain eye contact too. To stay and gaze, Interesting.

Begs the question, how long should a random conversation be? how long to show a person that you care?

For as long as both party is comfortable, I urge.